How to get here

There are several options to get to Peniche from Lisbon airport.

Take the A8 motorway in the direction of Loures / Leiria. Follow this motorway for about 70 km and turn off onto the IP6 towards Peniche. Continue straight for approximately 25 km. When arrived to Peniche follow the direction to Baleal. After a sign “Casais do Baleal” go straight more for about 700 meters and on the right side of the road find our surf camp with a poster Silver Coast and Surf House Helena on the face of the building.

There are two regular bus services between Lisbon and Peniche. The coach station of “Rede Expressos” is situated in “Sete Rios”, that is close to the Jardim Zoológico metro station. You can reach the station by taking Aerobus at the Lisbon airport (leaves from the line 2 every hour from 8am to 7pm). From the airport you can also get to the Sete Rios bus station by metro. The way from metro station called Aeroporto to Jardim Zoológico will take you around 30 minutes.

The second bus company is – “Rápida Azul”. Their buses are going from the coach station called “Campo Grande” which is located close to the metro station with the same name. To get there is fast by taking a taxi.

Timetable of the both companies you can check here.

Please, let us know your travel details, so we can meet you on your arrival at Peniche bus station and transport you to our accommodation or order you a taxi in case you are staying in other accommodation. Take a note that in Peniche buses stops firstly in the center and only after at the bus station. We will pick you up from the final stop (Gare).

By using our airport pick up service:

We’ll meet you at Lisbon airport in the indicated time and you’ll arrive at your accommodation in Peniche or Baleal comfortably and safely.

Our airport transfer offers you fixed price, no matter if you get stuck in traffic jam or your flight is delayed. It's a ride fare which means you can share it with your friends and split the cost equally between you (check the prices here). 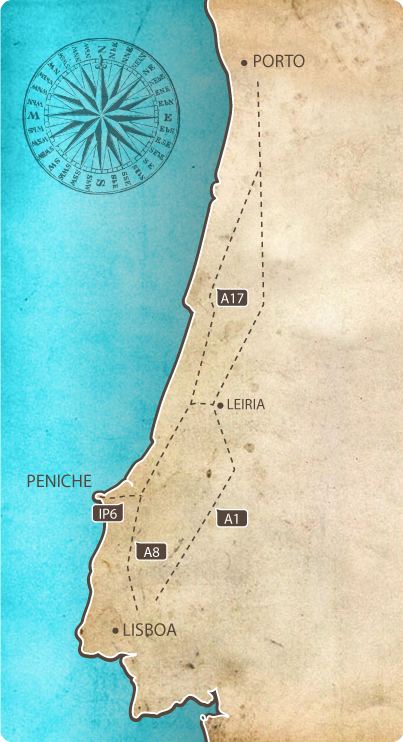